In most digital electronics projects that uses different kinds of switches, switch bounces are commonly encountered. These are extra glitches after the real switch operation. These are tiny pulses that affect the actual operation of the circuit like counters.

Here's a demo video of a switch bounce.


It is clearly seen that in certain push on the switch, the counting is not accurate. This is causee by the switch bounce. Here now is the image that shows switch bounces and a clean pulse. 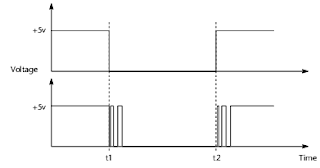 As you can see in the top image, this is an image of a clean pulse without a switch bounce. On the other hand, below it, shows the bounces formed from switching.

The circuit below is a RS latch that is used as a switch debouncer. It's composed by two 2-input NAND gates with outputs feedbacks to the input of another. (other explation from malvino) 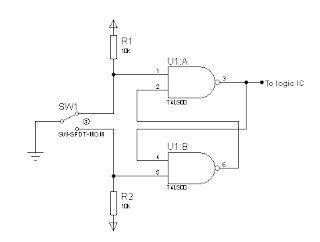 Here is now a video of a counter with swich debouncer.
Posted by Circuit Desolator at 9:42 AM